On Apple’s $29 iPhone Battery Replacement Program and Its Role in Their Earnings Miss by John Gruber
Tuesday January 15th, 2019 at 11:03 PM

I have a hard time believing that the $29 limited time offer had a significant impact on Apple’s numbers. Did Apple replace hundreds of thousands of batteries? I doubt it. At 100 replacements per Apple Store times 500 stores, that’s 50K happy customers and only $50M in missed new iPhone revenues. I’d have to be off by a factor of 10 — half a million iPhone battery upgrades, one thousand repairs per Apple Store — to approach a mere $500M in missed revenue.

[Update: My battery upgrade discussion above is wrong in two ways.

I’m pretty sure Gassée’s back-of-the-envelope estimate of the number of batteries replaced was way too low. During Apple’s all-hands meeting January 3, Tim Cook said Apple replaced 11 million batteries under the $29 replacement program, and they’d have only anticipated about 1-2 million battery replacements normally. (The fact that Cook held this all-hands meeting was reported by Mark Gurman at Bloomberg, but the contents of the meeting haven’t leaked. Well, except for this nugget I’m sharing here.)

But Gassée’s second point still stands: the battery replacement program ran all year long, so even if it was more popular than Apple originally expected, why wasn’t it accounted for in guidance issued on November 1 — 10 months after the program started? My guess: the effect of the battery replacement program on new iPhone sales wasn’t apparent until after the iPhone XR and XS models were available. A few million extra iPhone users happy with the performance of their old iPhones with new batteries — who would have otherwise upgraded to a new iPhone this year — put a ding in the bottom line.

ireuben
reply
I know I usually upgrade both my and my wife’s iPhones every two years, but after considering the XS or XR, we ended up just replacing our iphone 7 batteries in late Dec, and plan to use them at least another year. They still work well, and I’m not crazy about losing touchid. 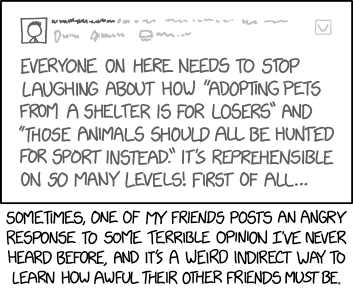 I totally thought this was going to be a “my hobby is...” post (or maybe that’s just what the friend is doing!).

effingunicorns
reply
this is how I find out about wank on tumblr--no wait, I'm sorry, "discourse".

chrisamico
reply
This is pretty much the social web in 2018.
Boston, MA

Fred Clark, the Slacktivist, has written a bunch of times before about the "Anti-Kitten-Burning Coalition". Long story short, probably no one is burning kittens or hunting shelter animals for sport; claiming such (and in many cases, convincing yourself you believe it too) is a way to make yourself feel like a hero for opposing something evil (Without having to do much work, since you can't actually go out there and fight the kitten-burners as said burners do not exist), and get other people to sign on to support your side because otherwise they're siding with the kitten-burners.
Columbia, MD

Sharing for the alt text.
Iowa

I'm like a prisoner in Plato's Cave, seeing only the shade you throw on the wall.

alt_text_bot
reply
I'm like a prisoner in Plato's Cave, seeing only the shade you throw on the wall. 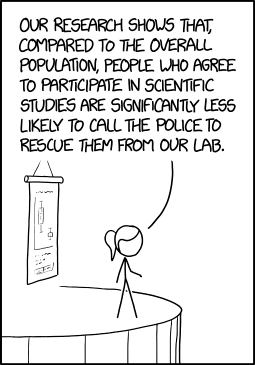 fMRI testing showed that subjects who don't agree to participate are much more likely to escape from the machine mid-scan.

alt_text_bot
reply
fMRI testing showed that subjects who don't agree to participate are much more likely to escape from the machine mid-scan.

Only a fool would dare interrupt Boston Dynamics’ SpotMini from opening a door by Natt Garun
Tuesday February 20th, 2018 at 11:50 PM

The Verge - All Posts

It was only a mere week ago that the world got to see what Boston Dynamics’ SpotMini robot dog has been up to. Not only did it make a new friend, it also learned how to open doors for said friend. How sweet.

A followup video posted today by the SoftBank-owned company, however, reveals a grave mistake by one of its creators. The video, titled “Testing Robustness,” shows a human attempting to get in the way of SpotMini’s door opening routine. He first halts the robot with a hockey stick, pushing its new arm attachment away from the door. When that didn’t work, he holds the door against the robot to prevent it from successfully pulling it open. SpotMini persists, which results in the man pulling the robot from behind and dragging it backward (breaking a small piece of its back along the way.)

After the man lets go, SpotMini marches on and completes its task. What SpotMini desires, SpotMini gets.

Boston Dynamics helpfully explains in the description of the video that “this testing does not irritate or harm the robot,” which, okay, sure — chant whatever you need to convince yourself you are not totally first on SpotMini’s kill list.

ireuben
reply
This is how it happens: 1. Learning algorithm to efficiently open doors 2. Human keeps preventing opening the door 3. KILL ALL HUMANS!

You Don’t Hear So Much About the iPhone 7 Headphone Jack Anymore by John Gruber
Thursday February 2nd, 2017 at 1:53 AM

Yep. The uproar over headphone jack was ridiculous. Clearly the market didn’t care.

It feels like ancient history already, but there were reviews of the iPhone 7 that spent more time on the removal of the headphone jack than anything else.

Also worth pointing out that the severe delay in shipping AirPods didn’t hurt sales of the iPhone 7. (Or if it did, not enough to keep it from breaking the record.)

ireuben
reply
Well, I bought an iPhone 7, and pretty much every day I'm pissed it doesn't have a headphone jack. I use ear buds on macbook, and used to swap them quickly to iphone for a call (while still charging) but now it's an annoying cable dance every time (unhook from charger, and either dig around for adaptor or lightening ear buds). If some other company made iOS devices I'd be all over it.

internetionals
I think the problem is that the lightning headphones are effectively iOS device only. If iOS devices used USB 3C like the macbook and the headphone worked with both, than it would make the whole transitions more "meh, this also works".

ireuben
Totally. If it had been a "USB-C everywhere" push, and I could use the same headphones (and chargers!) for all my devices, I'd be much more onboard with the whole switch. Also a big forward thinking move for the whole industry. But lighting only for IPhone *and* still headphone jack on new MBP seems very odd.

ireuben
ANd I've been really disappointed with bluetooth audio. Got some latest/greatest $300 sennheiser headphones, and they are decent for listening to music, but as soon as I use them for video conf (gotomeeting) or any other 2-way audio, they sound horrid. The cheapo little wired headphones sound soooo much better.